Spiritual Leadership on the Battlefield

Chaplains in the armed forces are "representatives of the holy," spiritual leaders often called upon to serve in some of the most dangerous places on earth, especially in times of war. They go wherever soldiers are called to duty to provide religious services and perform all tasks related to ministry at the battalion level. Although they are trained as non-combatants, chaplains are valiant and respected individuals who care for the soldiers’ spiritual well-being as pastor, mentor and friend. For many Army chaplains, their religious calling is deeply connected to a desire to serve their country.

In 1943, after the formation of the all-Nisei combat unit, the 442nd Regimental Combat Team, the Army assigned three Protestant ministers to accompany them. Chaplain Israel Yost joined the 100th Infantry in Salerno. Two Nisei ministers, Chaplain Hiro Higuchi of the Second Battalion and Chaplain Masao Yamada of the Third Battalion, joined the Japanese American soldiers at Camp Shelby, Mississippi, and were deployed to Europe with their respective units. The following year, Chaplain George Aki was the last Nisei minister to join the 442nd RCT. He stayed behind at Camp Shelby and eventually met up with the regiment in Italy during the final phases of the war in Europe. The chaplains faced severe adversity as they worked with the Medical Detachment on the front lines to support the soldiers in combat, comfort the wounded and administer last rites.

The Army upheld their commitment to provide spiritual support for all soldiers during World War II even though they included only Western religions. Buddhism was not recognized, even though most of the Nisei men were presumably raised in Buddhist households. Only 13 percent of those surveyed at Camp Shelby declared Buddhism as their religious preference and nearly half of the men declared no religion at all. But many of those soldiers converted to Christianity, declaring their faith in a higher power and participating in the fellowship that the organized religion provided. In part, it may have also been the personal charisma and profound caring nature of the chaplains assigned to the 442nd that drew the men toward God. As the horrors of war progressed, however, worship became nondenominational and the heartfelt ministry provided by these men of God overrode any religious differences. 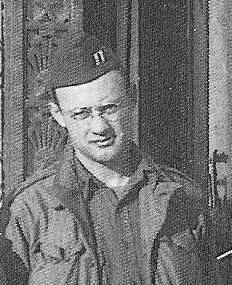 The Reverend Israel Yost was a Lutheran minister in Pennsylvania when he decided to join the war effort. Yost requested to serve in an infantry division so he could be in direct contact with the troops on the battlefield. He was the first chaplain to be assigned to the 100th Battalion of the 442nd RCT, and he joined them in Salerno just after their first battle. Although Yost had no familiarity with Japanese culture or the Buddhist faith, the difficulties they faced as a unit brought them together. As a haole in the midst of the Japanese American soldiers from Hawaii, Yost eventually learned to eat rice without milk and sugar and became a beloved and accepted member of the regiment.

Often in the face of danger, Chaplain Yost could be found with the most forward aid station tending to the wounded and those near death. He once led a party into the no-man’s land at Anzio under the Red Cross flag to negotiate the recovery of the dead Americans lying on the ground. Twice wounded himself, Yost earned the Purple Heart with the Oak Leaf Cluster, the Legion of Merit and the Italian Cross for Military Valor.

Later in his life, Reverend Yost and his family moved to Hawaii where he taught high school, started a new church and reestablished the friendships he had made during the war. Reverend Yost continued his work in education and the ministry until he was hospitalized with Parkinson’s disease. He died on June 25, 2000.

The stories of other chaplains will be continued in the months that follow...

The chaplains of the 442nd, while humble in acknowledging their own contributions, had courage to match those of the soldiers they served. These tireless men, whose helmets bore a white cross, faced death and destruction of historic proportions, yet they were committed to uplifting the spirits of the young men in combat, whether Christian, Buddhist or other. They provided pastoral comfort to the wounded and peace for the dying. It was the clergymen who tended to the affairs of those who died, sending personal belongings and condolences to the families of the fallen. And for all the excruciatingly painful situations they endured, the chaplains always found room in their own hearts to praise God and honor the men who defended America’s freedom.

Duus, Masayo and Duus, Peter. Unlikely Liberators: The Men of the 100th and 442nd, Honolulu: University of Hawaii Press, 1987.

Fire For Effect: A Unit History of the 522nd Field Artillery Battalion