Escaping Internment. For George Fukui, UConn was a way out… 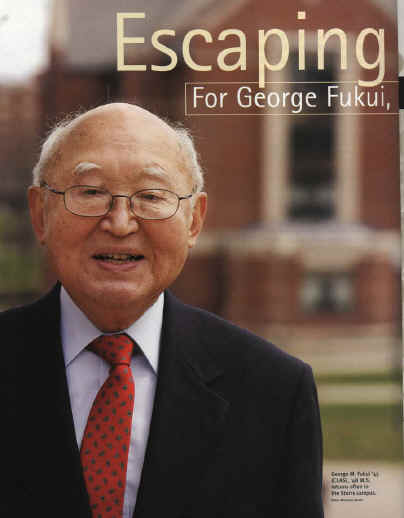 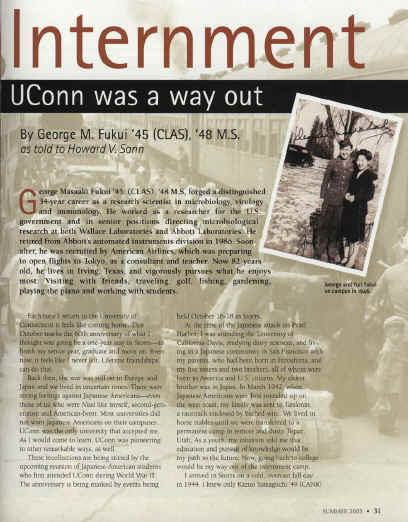 George Masaaki Fukui '45 (CLAS), '48 M.S., forged a distinguished 34-year career as a research scientist in microbiology, virology and immunology. He worked as a researcher for the U.S. government and in senior positions directing microbiological research at both Wallace Laboratories and Abbott Laboratories. He retired from Abbott's automated instruments division in 1986. Soon after, he was recruited by American Airlines, which was preparing to open flights to Tokyo, as a consultant and teacher. Now 82 years old, he lives in Irving, Texas, and vigorously pursues what he enjoys most: Visiting with friends, traveling, golf, fishing, gardening, playing the piano and working with students.

Each time I return to the University of Connecticut it feels like coming home. This October marks the 60th anniversary of what I thought was going to be a one-year stay in Storrs -- to finish my senior year, graduate and move on. Even now, it feels like I never left. Lifetime friendships can do that.

Back then, the war was still on in Europe and Japan and we lived in uncertain times. There were strong feelings against Japanese Americans -- even those of us who were Nisei like myself, second-generation and American-born. Most universities did not want Japanese Americans on their campuses. UConn was the only university that accepted me. As I would come to learn, UConn was pioneering in other remarkable ways, as well.

These recollections are being stirred by the upcoming reunion of Japanese-American students who first attended UConn during World War II. The anniversary is being marked by events being held October 16-18 [2003] in Storrs.

At the time of the Japanese attack on Pearl Harbor, I was attending the University of California-Davis, studying dairy sciences, and living in a Japanese community in San Francisco with my parents, who had been born in Hiroshima, and my five sisters and two brothers, all of whom were born in America and U.S. citizens. My oldest brother was in Japan. In March 1942, when Japanese Americans were first rounded up on the west coast, my family was sent to Tanforan, a racetrack enclosed by barbed wire. We lived in horse stables until we were transferred to a permanent camp in remote and dusty Topaz, Utah. As a youth, my intuition told me that education and pursuit of knowledge would be my path to the future. Now, going back to college would be my way out of the internment camp. 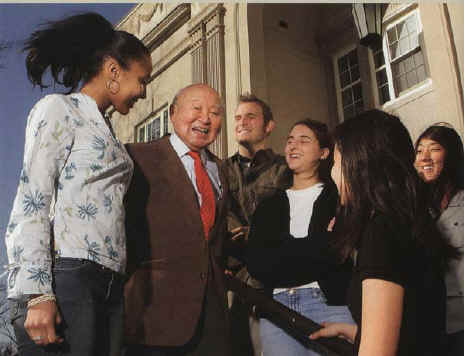 George Fukui meeting with students outside the Wilbur Cross Building on a recent
visit to UConn for the 10th anniversary of the Asian American Cultural Center.

I arrived in Storrs on a cold, overcast fall day in 1944. I knew only Kazuo Yamaguchi '49 (CANR) and Tetsuo Fuchigama. There were 10 Japanese Americans in the first group to arrive at UConn; eventually there would be 18 and, of those, eight completed their education there. The draft had decimated the UConn campus, leaving about 300 men and 500 coeds.

My time at UConn was life changing. The second weekend on campus I married Yuri Kenmotsu, whom I met in internment and would be my life partner for more than a half century. I crammed as many courses into my schedule as possible so I could finish in a hurry -- before I'd be drafted with other Japanese-Americans.

My classes started in dairy sciences and Professor Elmer 0. Anderson, head of the department, and his wife offered Yuri and me a place to live in their new farmhouse, on Route 44 above Four Corners, in exchange for helping around the house. Between work and classes, the days were long. I wasn't sleeping much and realized I needed more time to study So after the first semester, Yuri and I moved into a small apartment that had, of all things, bunk beds.

I also changed my major to bacteriology; surrendering to my growing interest in the mystery of life under the microscope. The head of the bacteriology department was Walter L. Kulp, who was a different kind of guy. He did not hesitate to take me on as a major knowing I would only be in his department for a short time. And for some reason too complex for me to comprehend, he took me in like his own son. He not only inspired me in class, but also soundly guided me in my career and became my greatest influence in the field of microbiology. In 1944, microbiology was an emerging scientific discipline, and immunology was not yet recognized as a separate area of study. Yet by hiring young, talented professors -- such as biochemistry professor Albert Kiine -- UConn was teaching modern biosciences, on the cutting edge even back then.

Other professors were also especially kind to me, including Vinton Esten White, an instructor in bacteriology who ran the labs. Professor White taught me many of the fundamentals of bacteriology, immunology and infectious diseases.

Other Japanese American students also found many friends among the faculty and administrators. Paul Pfuetze, assistant professor of philosophy who taught religion, and his wife, Louise, gave Shiro Aisawa '47 (ENG) and Bill Hayakawa places to stay. There was also a young assistant professor of mathematics, Erben Cook, Jr., whom they also got to know quite well. I remember one night when Shiro and Bill hitchhiked back from a movie in Willimantic, a car stopped to pick them up: The driver was UConn President Albert Jorgensen.

Eventually I was drafted,but by then the war was over in Europe and Asia. I spent my time in the Medical Corps and after my discharge in 1947, I returned to UConn to get my master's degree. After that, Professor Kulp asked me to join the faculty and teach microbiology to returning GIs. I stayed on for another year before leaving to pursue my Ph.D. at Cornell.

I went from barbed wire confinement to a college campus in Connecticut without barriers. I can't explain it, but there was no feeling of segregation at UConn. Japanese-American students were accepted on and off campus. We made friends and were invited to homes of faculty members for dinners, parties and holidays. My wife and I -- it never occurred to us at the time -- were being accepted into the American society as a result of our association with the University of Connecticut. The Issei, our parents and their generation of poor Japanese immigrants, all died hoping to be accepted into mainstream American society. They wanted this for their children.

So, the one year I expected to be at Storrs lasted from 1944 to 1949. I always had this special feeling for the professors at UConn, an appreciation for their helping me to attain my goals in life. Out of that respect, I've routinely come back to thank them. UConn is more than a second family to me, because it has also given me an extended family. I am quite fortunate because it was really by chance that I came to the University of Connecticut.

My fondest UConn memory is that first Thanksgiving in 1944, when it snowed the night before and was extremely cold. Most Japanese-American students whose families lived in the New York area had gone home, but there were a handful of us whose families were still in the camp -- including mine -- and not invited anywhere. My wife and I had a large chicken that the Andersons had given us, since they were having Thanksgiving dinner with friends elsewhere.

As classes ended, I happened to see Shiro and asked him where he was going. He said he was staying in the dorm, so I asked him to join Yuri and me, and we'd share whatever we had. He accepted, then asked if he could bring some friends. When they came, there were five of them and Yuri just nudged me and asked what to do since we didn't have that much to eat. I told her, just put more things in the soup. We looked in the refrigerator, pulled out the potatoes and carrots and onions, whatever we could find, put more rice in the pot and somehow we all managed to have Thanksgiving.

Our friends were going to leave after dinner but it was snowing and blistering cold. Even though we had no room to put them up, we invited them to stay over and they ended up sleeping on the couch and on the floor. We even managed to have coffee for them for breakfast.

Fifty years later, Yuri and I were in Foster City, Calif., and got together with Shiro. We were reminiscing about UConn. I asked him about his fondest memories at UConn and he said: "That first Thanksgiving when I had no place to go and you offered us dinner and we all shared that one chicken."

Sixty years later, my UConn connections still persist and surprise. Since 1987 I've taught over 6,000 American Airlines flight attendants about Japanese culture, philosophy and religion. One of the first questions is usually about my accent. They ask, "Are you from New England?"

Yes, I tell them I found a home in Connecticut.

Pictures from the family album...under construction... 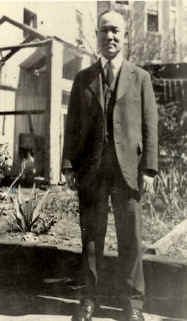 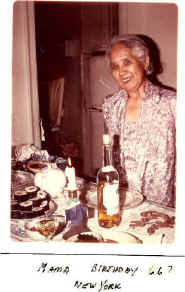 Kimiko Fukui, George's mother
Born in Japan in 1898, she was
a picture bride 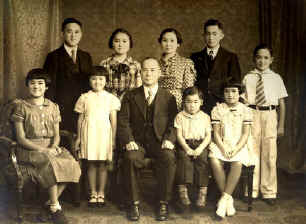 Family picture before
brother Frank left for
Japan in 1938
George is back row, right

Horse stables - before internment at Topaz 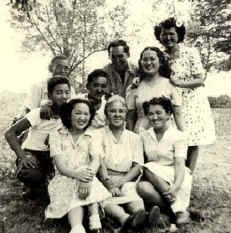 Fukui family in 1946
(George back center) 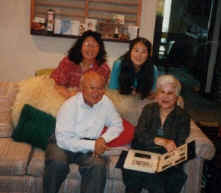 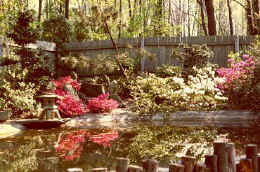